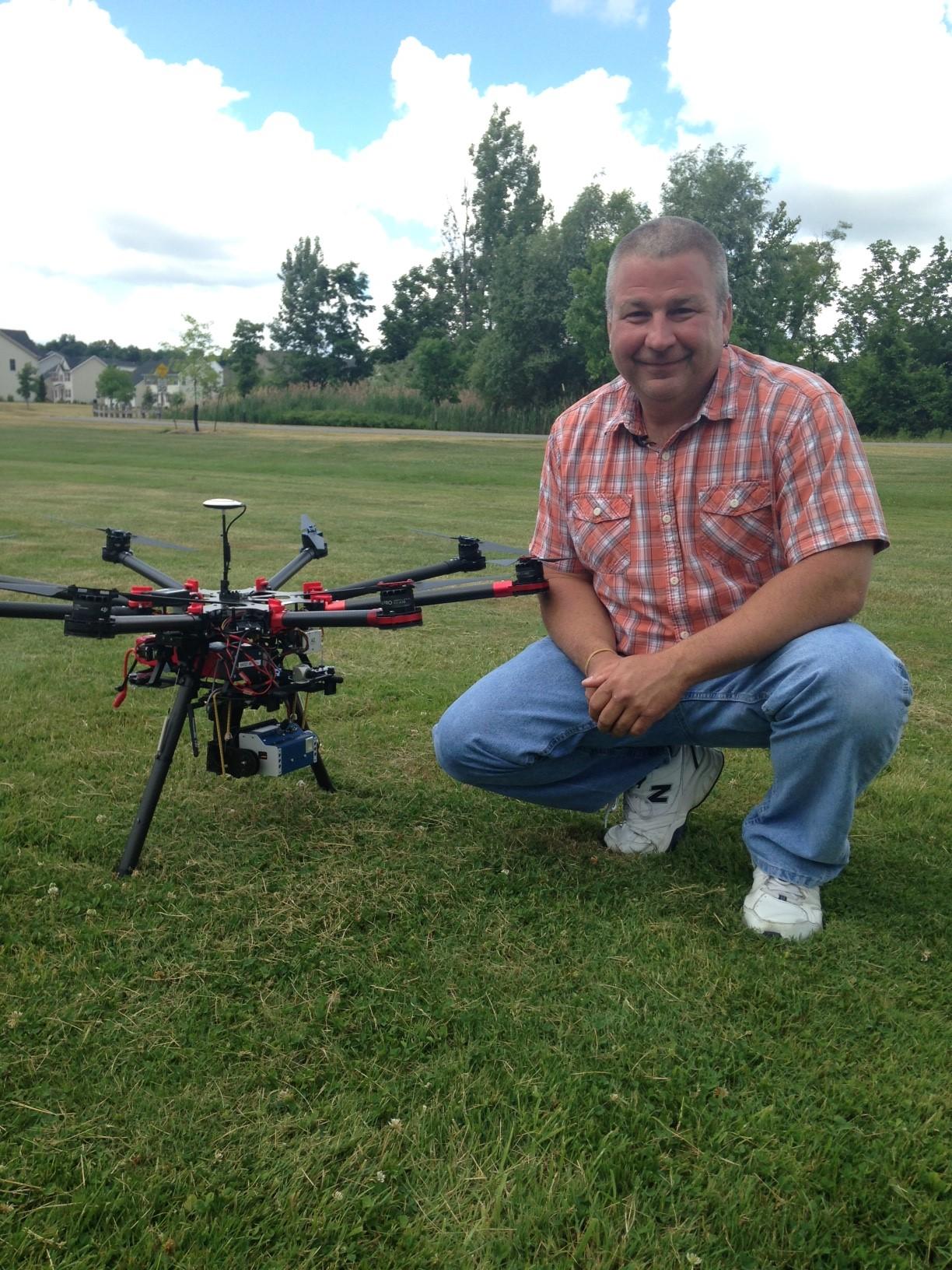 On a cloudy summer morning, Rochester Institute of Technology professor Carl Salvaggio and a student from the school’s Center for Imaging Science stood in an open Pittsford field, eyes fixed on the sky. They were flying an unmanned aircraft system — also known as a drone — with the help of a longtime pilot.

The trio took the DJI S900 n-copter on a series of 20-minute test flights, to check how well its sensors and six high-definition cameras can provide aerial imagery for precision farming. Salvaggio moved to a table off to the side, using a computer loaded with data-tracking software. He set up a small monitor on a tripod next to him to get a closer look at the airborne drone. Its short voyage would help the researchers assess the health of the vegetation.

“If we’re trying to give a farmer important information about the health of his crop, unless we can calibrate the imagery in every shot to make sure that it’s going to be given exactly the same information every time, he’ll get false data,” said Salvaggio.

The devices provide a level of detail that is much greater than methods of the past, such as satellite imagery or pictures taken from aircrafts. During one test run, Salvaggio’s UAS captured data from about 400 images.

“As the grass looks more and more bright in the infrared, that means it’s healthier. If there’s water stress, the infrared brightness will diminish,” he said.

The Federal Aviation Administration has released a set of highly anticipated rules that take effect in late August. Users say the guidelines add welcome structure to the practice and will boost commercial drone use.

The 600-plus pages of new regulations require drone operators to keep the unmanned aircraft within sight, avoid flying it over people, operate only during daylight and pass a written exam every two years. The rules also require the remote pilot conduct a preflight inspection and fly the drone no higher than 400 feet.

“I don’t think the FAA is in the business of trying to keep people out of this market. I think they just want to know who’s in there, and they want to know what platforms they’re operating,” said Salvaggio.

Salvaggio, who has only four months of experience with drones, said they’re easy to use. That’s part of the reason commercial industries around the world are increasingly looking to them for remote sensing.

The machines also are fairly low-cost — one like Salvaggio’s runs for nearly $1,500 — and allow them to collect information in real time. Drone use is expected to change the game in farming, law enforcement, defense, insurance inspection and many other industries, according to Fortune magazine. But Salvaggio and other users said the rapid development in technology has led to problems, like unexpected crashes.

“They are not 100 percent reliable. They’re going to fall out of the sky,” said Salvaggio.

In Canandaigua, Brian Pitre’s business office is lined with various types of drones. He co-founded SkyOp LLC, a UAS education company, three years ago. The company offers a college-level how-to course on flying drones. The course, which costs about $1,500, provides students with hands-on instruction, a computerized flight simulator and their own small drone for training purposes. Pitre said drone popularity has skyrocketed since he got involved in the industry.

“Today we have eight colleges that are our partners and we’ve expanded out of New York state,” Pitre said.

He expects the recent FAA update will spark a continued set of regulations, giving even more control to remote pilots.

“The aviation planning committee is now working on the next set of rules that they’re going to put out. That’s going to address some additional things like the ability to fly beyond visual line of sight, flying over crowds and nighttime flying,” said Pitre.

Growth of the industry prompted RIT to apply for a $1 million grant for drone research. With the funds, the multi-disciplinary team, which includes Salvaggio’s imaging science students, has set up a UAS laboratory. They are identifying ways to integrate drone technology to serve even more commercial needs, such as water quality monitoring.

“We’re currently working with some folks out on Owasco Lake and trying to map the algal blooms that are forming on that lake. We can map the algae, do some computations and figure out how much fertilizer has run off from the farms around that area.”