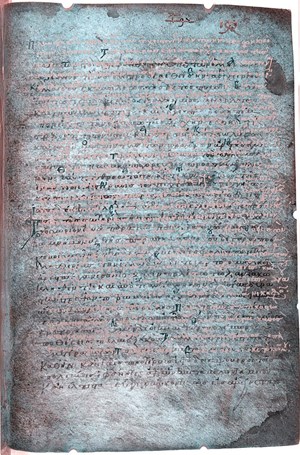 At left: The book pages are irradiated with light of different wavelengths. Because parchment and ink varies strongly absorb this light, the hidden font will be exposed.

*This article is translated from German. Please excuse any translation errors.*

Quasi invisible ancient writings, the store in the Austrian National Library, give thanks to modern technology reveal their secrets

Vienna - Konstantin Opel in the 16th century: Ogier de Busbecq is Imperial as an official envoy of His Highness Ferdinand the First stationed in the capital of the former Ottoman Empire. But the interest of the Flemish nobleman is not only his diplomatic mission. "He was an avid collector handwriting," said the philologist Jana Grusková.

The Bosporus metropolis provides for the bibliophile Ambassador is a very interesting hunting ground. Over the years, acquired de Busbecq more precious tomes, so books in the format of a half sheet. Including a bound collection of ecclesiastical decrees from the 10th century. Later, he bequeathed these works of the Viennese Court Library. The book mentioned above is cataloged sometime under the title "Codex Vindobonensis historicus gr. 73" and disappears on the shelves.

The Sleeping Beauty takes about 400 years. Then start several scientists, the holdings of the Austrian National Library to search systematically for so-called palimpsests.These are books and music from multi-described parchment.The writing material made ​​from tanned animal skin was expensive and was often used in the Middle Ages several times. But one scraped from the ink of the original font, to again existed a blank sheet.

But often, the memory of the first text received - a potential treasure trove for scholars. To make the font remains readable again, researchers used in the 18th and 19th centuries, various tinctures, as Grusková reported. However, these chemicals also deployed a destructive effect: So the text was indeed decode and write the content, but the manuscript itself was slightly lost for posterity.

Modern technology has since been ready much more elegant solutions. Grusková, who works at the Austrian Academy of Sciences in Vienna, is currently working together with their colleagues Gunther Martin of the University of Bern in mind, the "Codex Vindobonensis historicus gr. 73" to elicit its secrets. The Austrian Science Fund FWF funded the project.The band eleven palimpsestrierte leaves were added in the 13th century at the end. On them monks monastic rules and prayers were written.

The parchment sheets originally come from two different manuscripts from the 11th century. Their text fragments were indeed discovered decades ago, but they were not using the UV light still frequently used read carefully. Too weak were the ink traces.

Let there be light

A collaboration with American experts has now brought the breakthrough. The technical team of the Early Manuscripts Electronic Library (EMEL), a research organization based in Los Angeles, traveled to Vienna with his equipment and sat there a newly developed multi-spectral method. In this case, the sheets are irradiated with light of different wavelengths.Each is absorbed to different degrees of parchment and ink.

The degree of absorption can be noted on specific photographs. The scientists then add the images in the computer together and get so amazingly detailed illustration of the hidden font. The readability of the text has been increased from 15 to 60 percent, says Jana Grusková. Now open up whole sentences and the content.

Most of the palimpsests of the Codex contains reports on the lives of saints. Particularly interesting are the last two double sheets: You seem a copy of Scythica to be taken by the Greek historian Dexippus of Athens. A small sensation.Because so far were of this work only quotes and transmitted clippings known.

Dexippus lived in the 3rd century AD. In the Scythica he describes how his time come Gothic tribes on the southern Balkan Peninsula. Today Greece and the areas north of it were under the Roman Empire at that time. The invaders left devastation. Several cities were sacked, including Thessaloniki and Athens.

The history of these campaigns is considered to be poorly documented. There has been no detailed representations of witnesses. The Wiener palimpsests but can obviously close some gaps in knowledge. The Dexippus attributed both texts report on the invasion by a Gothic army led by Prince Cniva during the years 250/251 and 267/268 on the so-called Herulereinfälle. The first fragment included a certain Ostrogotia is mentioned. He was probably a Gothic chieftain and was already surfaced in other, later writings. "Many say that was an invention," says Gunther Martin. "We now have a contemporary source that confirms that a man of that name really exists."

The second part of the text contains a more important and hitherto unknown facet. The chronicler reports on the collective resistance of Hellenic troops from different cities.They had the advancing Goths, here called Heruli, contrasted together at Thermopylae - where the country was 687 years before that defends against the Persians. Dexippus, the Greeks represent a unity, but what they were not, as Martin says. "It conjures up the Hellenism." However, the command had a Roman official.

For a fascinating detail, the researchers did not need technology: A prominent previous owner of the tape purchased by de Busbecq, Theodosius IV, Patriarch of Antioch, has left on the last page of a warning to potential thieves. "The one who alienates these Codex, may the indissoluble excommunication by the Father, the Son and the Holy Spirit subject and suffer the fate of the traitor Judas. " No question, the man loved his books. (Kurt de Swaaf, THE STANDARD, 10/29/2014)

Read More Read Full Story »
Original Source: der Standard
RIT researchers win first place in international eye-tracking challenge by Facebook Research
‘Global Women of Light’ to gather for international symposium at 2019 Frontiers in Optics
Drones are coming soon to a farm near you
RIT and Seneca Park Zoo researchers capturing the sights, sounds and insects of Madagascar
Imaging a future for the past – uncovering lost text from manuscripts
RIT researchers developing ways to use hyperspectral data for vehicle and pedestrian tracking
Leaders in drone technology to converge at RIT for STRATUS conference
Catherine Carlson, longtime area philanthropist and community booster has died
Collection phase begins for “Images from Science 3” exhibition planned for RIT in 2019
RIT, NASA, JHU and STSI evaluate use of digital micromirror devices in space applications